The following story of Clayton Laundry includes information compiled by the late John Joinson (3rd generation) and from a history of local mills compiled at Clayton-le-Moors Library.  It is not intended to be a complete record but to give an insight into a company whose name became well-known throughout East Lancashire during its 82-year trading life.

The company was founded in 1904 by John Joinson , a carpenter by trade, and his wife Sarah.  There is a tale that Sarah Joinson was already taking in other people's washing and that this was the inspiration for the start of the laundry.  Another tale has it that John Joinson was working on repairing the roof of an existing laundry in Accrington and the idea stemmed from that.  Maybe neither are true but they are nice thoughts.

The first washing machinery was purchased in 1905 and the first boiler installed in 1906.  The building, Eagle Works, which was the central core of the business for almost its entire trading life was purchased in 1908.  A bore-hole was sunk 185 feet under the factory in 1911 and a pump installed which allowed water for the washing processes to be extracted from the underground water table.

In 1922 the business became a partnership, John Joinson & Sons, comprising John Joinson and three of his sons, Thomas, John and William (my father).  The first motor van to replace horse-drawn vans for collection and delivery was obtained in 1927 and the expanding fleet of red and blue vans with white roofs became easily recognisable throughout the local area.  It has been said that Accrington Corporation Transport copied the colour scheme for their buses but it's probably just a local myth.  The last surviving horse-drawn van was still operating locally into the early 1940s. 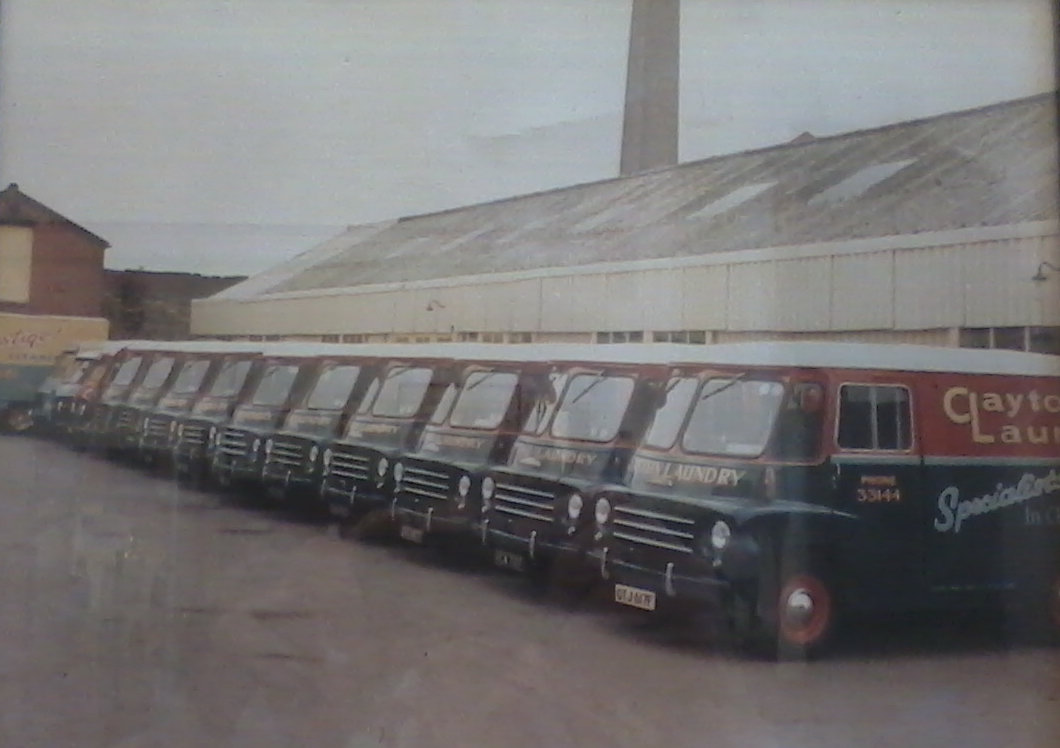 The founder, John Joinson, retired in 1936 and the business was taken over by the three sons and became a limited company under the name of Clayton-le-Moors Laundry Ltd. although it became more popularly referred to as just Clayton Laundry.  When the drycleaning of suits and dresses became an accepted practice around the time of the Second World War, the company established a drycleaning department.  Later, the name Prestige Cleaners was registered for this part of the business and in the late 1950s several drycleaning outlet shops were purchased in surrounding towns.

In 1942 the third generation John Joinson joined the company and remained throughout the remainder of the company's trading life.  Over subsequent decades other third generation family members joined the company, namely Gordon, Clifford and myself, but John was the only one to stay till the end.  During the company's peak period it aquired Marton Laundry in Blackpool and Darwen Steam Laundry near Blackburn.  Gordon and then Clifford spend many years at Marton before coming to Clayton. During Blackpool Illuminations periods the overflow of work from Marton used to come to Clayton.  Free hot pies and peas were provided in the canteen for staff who worked overtime to clear the extra work.

In later years as households became more affluent, more and more homes were installing domestic washing machines and, with laundrettes springing up everywhere, the company's domestic trade was in decline.  Linen-hire was also taking over commercial trade and eventually the factories at Marton and Darwen were closed.

In July 1983 Lancashire Enterprises Ltd., the financial investment arm of Lancashire County Council, purchased 50% of the company's shares and appointed a new Managing Director.  Later that same year the main factory of Clayton Laundry was destroyed by fire, the gutted building being fenced off for safety reasons and eventually demolished.  All laundry processing work was sent out to other laundries in the area until the new site at Premier Mill in Great Harwood was established.  The premises at Premier Mill were purchased in early 1984 and Clayton Laundry again began to process its own customers' laundry.

In January 1986 the Managing Director of the company sent a letter to LEL asking for a receiver to be appointed.  A receiver was duly appointed in February of that year and Clayton Laundry closed its doors for the last time on June 27th 1986 after 82 years of trading.

Eagle Works was originally a four-storey printworks known as Spring Bank Mill with two cottages attached known as Hyndburn Terrace.  In 1851 it was leased to J. & R. Cardwell, a waste spinning and manufacturing firm.  Cardwell's failed during the cotton famine and the lease was taken over in 1865 by L. Whitaker & Sons of Haslingden.  James & Smith Barnes aquired the lease in 1872 but their business was ruined in 1873 by a spectacular fire.

The fire-damaged building was reduced to two-storey and converted to an iron foundry.  A. Pilkington & Co. initially worked the foundry and later, S. Stevenson & Sons of Great Harwood took over.  Among the foundry products were cast iron ash-pit doors, grates and lamp posts.

In 1908 the building was purchased by John Joinson for his expanding laundry business.  The stumps of charred beams from the 1873 fire remained visible in the second storey roof space for many years during the laundry's occupancy of the building.  The stable for two horses for the horse-drawn vans was at the rear of the building.   These horse-drawn vans would travel as far as Blackburn making collections and deliveries.   The garages facing the main building were purchased from John Blake Ltd at the beginning of the second world war and were used to house the  growing fleet of motor vans.

Single storey extensions of brick and asbestos were built to the rear of the building in the 1930's and 1950's.  These were actually at upper floor height because of the sloping land on which the factory was built.  In 1965 the boiler at the factory had to be taken out of service for repair.  In order to keep the factory working a temporary mobile boiler, similar to a traction engine, was set up outside the boiler-house and the pipework coupled up over a weekend.  The sight of this large boiler parked outside the factory caused quite a lot of interest in the local community.

The established general layout of the factory in its prime operation as a laundry is as follows:-
The ground floor of the main building was the wash-house and drying area whilst the upper floor accommodated the packing department, shirt finishing area and main office.  The extensions to the rear were the loading bay, sorting room, press department and callendar department.  The ground floor of the cottages was the drycleaning processing area whilst the upper floor was occupied by the canteen and offices.  The extension to the rear of the cottages housed the drycleaning finishing department.

In 1983 the second major fire in the history of Eagle Works engulfed the building which then had to be demolished leaving just a grassed-over area where a once-proud factory stood.

Back to Home Page: